Who said boarding schools couldn’t be fun in lockdown?

Linked InShare on FacebookShare on TwitterPin This

Following an autumn term with minimal disruption from Covid (only two positive cases in school), Dover College boarders returned in January with high hopes for the term ahead. But boarding school life as we know it wasn’t to be, with the prime minister’s announcement of a further national lockdown made within hours of them returning.

Spending two months locked down in school was a daunting prospect for the fifty out of sixty boarders who made it back to the college before the lockdown. And the same went for the resident staff who would be caring for them.

But as we all know, life has a funny habit of surprising us. Once boarders got over the initial surprise that their day pupil friends would not be joining them and the frustration that they would be limited to the school campus, certain unexpected benefits quickly began to emerge. With quarantine successfully completed by all, the formation of a “boarding bubble” covering the resident boarding staff and pupils allowed aspects of life to resume in a way that it could not for those at home.

For boarders, their interactions with others were not solely made through a screen; they could safely eat and socialise together, participate in sport and benefit from the range of activities put on by the resident staff and catering team. Life at the school soon took on a quasi-normal feel, albeit with lessons being attended virtually from bedrooms during the daytime. Some of the boarders who had not been able to travel to the UK in time before the lockdown even requested that they be allowed to return. Of course, sadly restrictions prevented this from happening.

“What began as a throwaway conversation between resident boarding staff quickly took on a life of its own.”

But as the weeks of lockdown passed by, with no apparent end point in sight, it quickly became clear to all that the boarders needed something specific to focus their attentions on. The various lockdown competitions, including photography, baking, poetry and stop-motion animation, were enthusiastically engaged with but served only as temporary diversions. 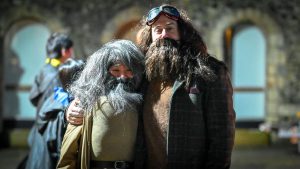 What began as a throwaway conversation between resident boarding staff over supper one evening, about a Harry Potter themed dinner in the college’s 12th century refectory (which bears more than a passing resemblance to the Hogwarts Great Hall), quickly took on a life of its own.

An evening event soon turned into a whole day one, and before long a week of Harry Potter themed activities was on the table. In line with the college’s aim to develop leadership in its pupils, boarders were quickly engaged in the planning and execution of the week.

Having a husband and wife who are also head of DT and an art teacher resident as houseparents on site certainly proved helpful, and many hours were soon being spent by boarders in the DT workshop and Art studio preparing an incredible array of props. 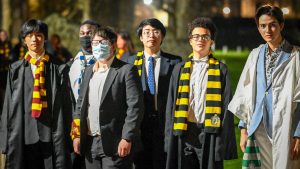 Even the more cynical upper sixth pupils, who initially were focused on their studies, were swept away with the creativity and excitement filling the air.

The week began with pupils being sorted into their Hogwarts houses by the Sorting Hat. Pupils went on to participate in a Quidditch match (some creative thinking was required here by our director of sport), attended a potions class and learnt how to make wizarding candy. The week culminated with a grand banquet, with pupils and staff in full Hogwarts regalia. Boarders arrived at the refectory through the cloisters, which had been transformed into Diagon Alley, made extra atmospheric by the use of a smoke machine.

“The week did provoke some jealousy from day pupils, who watched their antics through social media.”

The Harry Potter week, and build up to it, proved to be the highlight of lockdown for the boarders. However, it did provoke some jealousy from day pupils, who watched their antics through social media. I quickly felt compelled to promise that we will repeat the exercise later in the year, once the school community has come together again.

Whether by chance or by design, the magic associated with the Harry Potter week meant that our boarders will be left with a positive memory of this disrupted period which might otherwise have been characterised by a sense of confinement and repetitiveness. Who says lockdown boarding life can’t be fun?

Energy costs: ‘This perfect storm may push schools over the precipice’

‘The Queen was an antidote to the superficial and trivial’

‘That understanding of shared values feels ever more uncertain’

284
No Result
View All Result